In 2009 the client approached me to create him a website.
His current state was, being a small dealer for used forestry machines, selling them on the major platforms (mascus, agriaffaires, autoline and technikboerse), also he was exclusive dealer for a manufacturer of harvesting aggregates.
We quickly came to the conclusion, that he wanted more.
Selling on his own site and become a trusted brand for used machines.

We defined a goal.

being perceived as the most reliable source for well-kept and refurbished, used forestry machines

First step was to give the company a look. With an incredible long word like Forstmaschinenzentrum, it became soon clear that we have to go for FMZ, but as fmz.de and fmz.com where already taken, and forstmachinenzentrum.de was already established, it should become a combination of the abbreviation for good legibility and the full word. I also wanted a strong image to label all machines they sold.

The content of the website could be structured into machines, products (the aggregates) and services(insurance packages etc.). As there was no earlier usage data available, our blind guess assumption was, the usual visitor uses the site on an office desktop. Often an old one (with IE6 and before). So the first design focused on working on old machines and prehistoric browsers.

After a little bit more than two years, we looked into the data acquired through google analytics. It showed, that the users computers seemed to be much more modern than assumed. Mobile was still only 10% at that time, but growing fast. More than 75% of landing page interactions led to the machines page, also nearly all visitors via google search came for machine relating expressions. As the aggregate business grew more and more uninteresting, we decided to enforce this behaviour. Instead of the three big direct link buttons, there should be only one now, leading to the machines page.

Around 2015 my client wanted to have the site in multiple languages. As the used CMS was Textpattern, I realised that with the help of MLP. But while having the always changing machine catalogue translated to English and French (at least for a short while) worked, Czech, Polish, Finnish and Russian never got enough attention.

Analytics showed that the content structure still worked. Mobile visitors where up to a bit over ⅓, everything developed as expected, so I used that technical rebuild just for some style refinements.

In 2020 the client chose to have no cooky consent pop up, because of the new European privacy rules (DSGVO). So they asked me to turn off analytics instead of having that pop up. I reached out to the client to put that google analytics data to some final use and do a complete relaunch.

Nearly half of the visits are from mobile devices, probably even more are touch devices. That's really low compared to other sites, but it was always an assumption, that forstmaschinenzentrum.de is visited in an office most of the time.
The machine catalogue is mostly browsed by type.

I had the opportunity to interview two of FMZs year long customers, and also FMZs sales people. Those insights and the analytics data gave me the following problems. 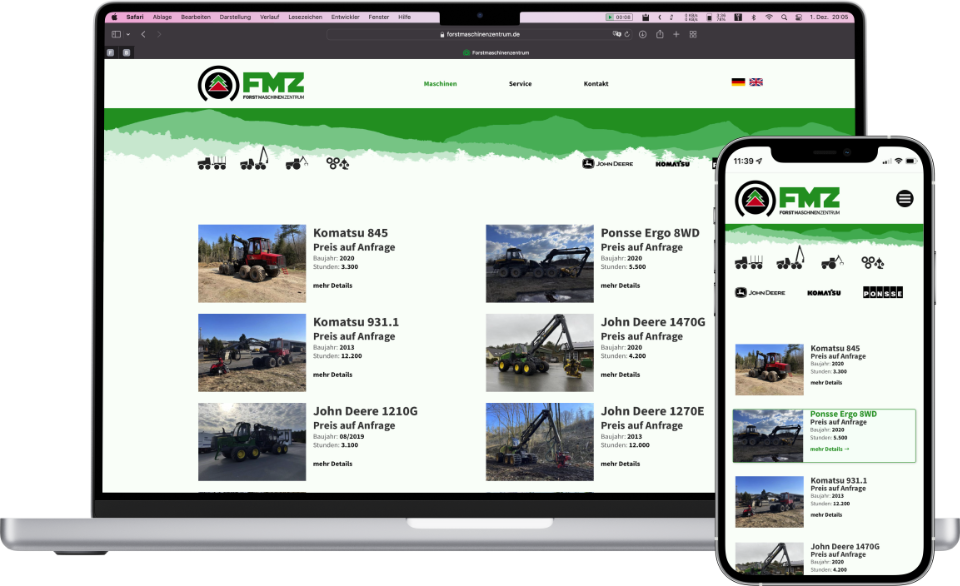 I created a bunch of icons for machine type selection. That navigation and also the brand navigation stay always on top now. To make the machine catalogue a bit more touch friendly, I defined the whole machine as a button in list view.

The general look got a modern refinement. The key image was replaced with an abstract scenery, to be able to give the site a frame without loosing too much space.

To help the customers with a fear of not selling their old machine properly, we formalised a service of helping them and featured that on the start page.

Unfortunately the multi language plugin has seized to exist. But I found a solution that, for the customer is similar easy to use and isn't dependent on a plugin. So no more blocking the upgrade path of the CMS (as it happened with the old one).

With some more thinning in the general site architecture, it should be ready for ten more years now.

So after all I'm really pleased with the result. And the customer is definitely too. Not only because of, but with the help of my work, he is one of Europes biggest sellers for used forestry machines today.